The Early History of the Earlimart Area

No area in the state of California retains a greater wealth of historical drama than the San Joaquin Valley. Earlimart and its particular story have evolved within and contributed to the romance that is California history.

Most writers compiling historical surveys of school districts are compelled to begin with tales of the Indians who originally inhabited their area. Thanks to a bulldozer and an intellectually curious rancher, we may begin our story by discussing those who inhabited the Earlimart area many years before the Indians as we know them.

It was in the autumn of 1949 that a rancher driving a bulldozer on his land a few hundred yards east of Highway 99, began to uncover large quantities of what appeared to be human bones. Realizing that his find may be of some anthropological significance, he notified professor A.L. Kroeber, a well known and highly respected anthropologist from the University of California, who was noted for his studies of the California Indians. From the remains and implements his colleague found, it was determined that, indeed, the people who were buried there were not Indians but were instead a group that inhabited the area some 10 thousands years ago. [1] Little else is known about these citizens except that they probably represent one of the earliest encroachments into Western culture by groups of Asia tics who came across the Bering Straits and through the Pacific Northwest.

Quite unlike the Indians of other parts of California, the Yokuts, who occupied the southern San Joaquin Valley, were divided into true tribes. In fact, there were at least fifty tribes of Yokuts at one time, who, while having linguistic differences, maintained a relatively uniform culture. While many of the Indians of the eastern and southwestern United States had been disturbed by western immigration for 250 years, most of the Yokuts’ tribes did not come in contact with white men until as late as the early 1860’s.

Pedro Fages, later one of the Spanish governors of California, came into the San Joaquin Valley in 1769 in search of deserters from the Spanish armies. Soon after his arrival, Franciscan Brothers were making explorations in the Valley, but decided against founding any missions in what they chose to call the interior of “terra incognita. [2]

While the Spanish occasionally crossed over into the valley to chase bands of marauding Indians who had visited the coast in search of horses, they “made no attempt at settlement and apparently came into the valley with no idea of gain.” [3]

Jedediah Smith was the first white man to enter the San Joaquin Valley by climbing the High Sierras from the east. While his life was brought to an abrupt halt at age thirty-three by a band of hostile Indians, he was soon followed by such famous men as Fremont, Sutter, Kit Carson, Lebeck and others.

By the early 1800’s whole families were making the difficult trek and were beginning to settle in the valley. One such group of families, among whom were the Kramers, Howards, Moyles, Hesses, Frasers, Glynns, Goldmans, Hughes, and others, chose a site located on Township 23, Range 25, east of the Southern Pacific Railroad line, and decided to stay.

They named their new town “Alila” from an Indian word meaning “land of the flowers” or “valley of the flowers,” depending upon who you ask. The name was apparently chosen because of the profusion of wild poppies and other flowers that bloomed in this area in the spring.

Alila in the Wild West

Alila was not without its share of Wild West adventure. The famed Dalton gang began its criminal career of banditry in this sleepy little town on the night of February 6, 1891, at what is now the Washington Street Railroad Crossing. Kathleen Edwards Small in her History of Tulare County gives us a vivid description of the heinous crime perpetrated that evening.

“Three men climbed aboard the blind baggage end of an express car and from there made their way forward to the locomotive. Once having reached that advantageous position for obtaining control of the train, they intimidated J.P. Thom, the engineer, and G.S. Radcliffe, the fireman, with dangerous looking pistols and forced them to bring the train to a halt. The two locomotive men were forced to go to the express car and commanded to request the express messenger, Charles C. Haswell to open the door to his car. The messenger scenting (sic) that all was not as well as it should be, refused and blew out the lights, and when he learned to his own satisfaction that bandits were attempting to bring their nefarious work to a successful culmination, set about the task of frustrating their purpose with shots from a saw-off shotgun. A rapid fire exchange of bullets followed, bullets belching from the fangs of both the express messenger and the bandits, who endeavored to fire through the walls of the car and slay the messenger. Radcliffe was struck by one of the flying bullets and was fatally wounded. The bandit gang finally concluded their chance of obtaining a rich haul of booty was slim and took flight, vanishing in the darkness. It was believed the robbers fled upon horses they had in waiting.”

The First School District is Developed, 1886

On April 4, 1886, a school district was organized by the hardy settlers that clung tenaciously to the dry soil in what was then called Alila. It was, until 1922, to be known as the Alila School District. As if enough hardship had not already visited the courageous people of Alila, they were soon to lose one of their greatest sources of pride, their school house. In the spring of 1892 it burned to the ground.

Not to be discouraged by the fire that in a few brief moments had reduced their school to cinders, the remaining settlers began to build a new school house and by the fall of 1893 were ready to open once again.

It was a beautiful building of two large classrooms, with a proud, steeple-like cupola on top. This school house saw continuous use until about 1920 when it was taken apart board by board to make room for a newer, larger school.

The salvaged remains of this, the second Alila School, were used to build the house still occupied by James B. Howard.

In 1910 – 1911 a settlement was started practically on top of the abandoned site of Alila by a group of land promoters from Los Angeles. The surrounding land was sold to newcomers for the purpose of raising fruits and vegetables.

The promoters named this town “Earlimart”, coined from the words, “Early Market,” as the products were reputed to ripen at an earlier date than in other climates.

When the investment company tried to get the Southern Pacific Railroad to put a spur to their center which was composed of a store and post office, they were refused and the project fell through.[4]

By 1916 conditions had changed once again. New settlers came into the area, old timers began to return and the original town of Alila began to show signs of new life. Soon the name of Alila was dropped by common consent and the name of Earlimart was taken.

The planting of grain soon gave way to fruits, vegetables, melons, cotton and even vineyards, as the rich soil and new wells teamed up to give these rugged people a new lease on life.

At last the years of holding on to the school by importing three-year-olds, gave way to a dynamic period of growth.

Average daily attendance moved from 106 in 1920 to 740 by 1948. The district began to enjoy, for the first time, a small modicum of security. The people who had once been forced to leave their town and their school, resolved that this time they would stay and make it work.

This period saw a new breed of leadership, when T.R. Nickle was appointed the first Superintendent of Schools. He remained until his election as Tulare County Superintendent. Instead of the let down that often comes after the departure of an inspiring leader, Earlimart was fortunate to have a new Superintendent, Howard S. Glover, come straight from the teaching ranks. This administrator, through the next thirty years, has become one of the county’s most highly respected educational leaders. 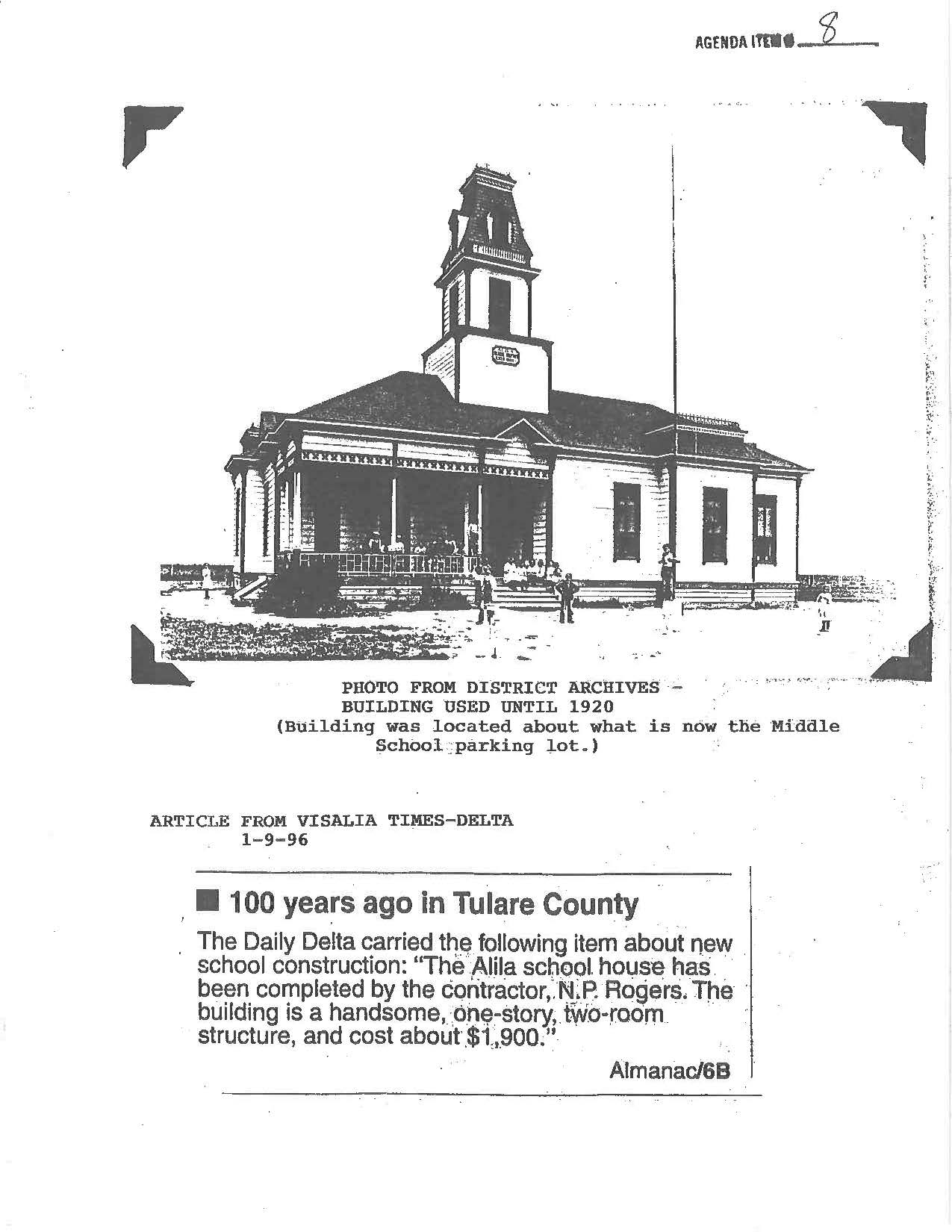 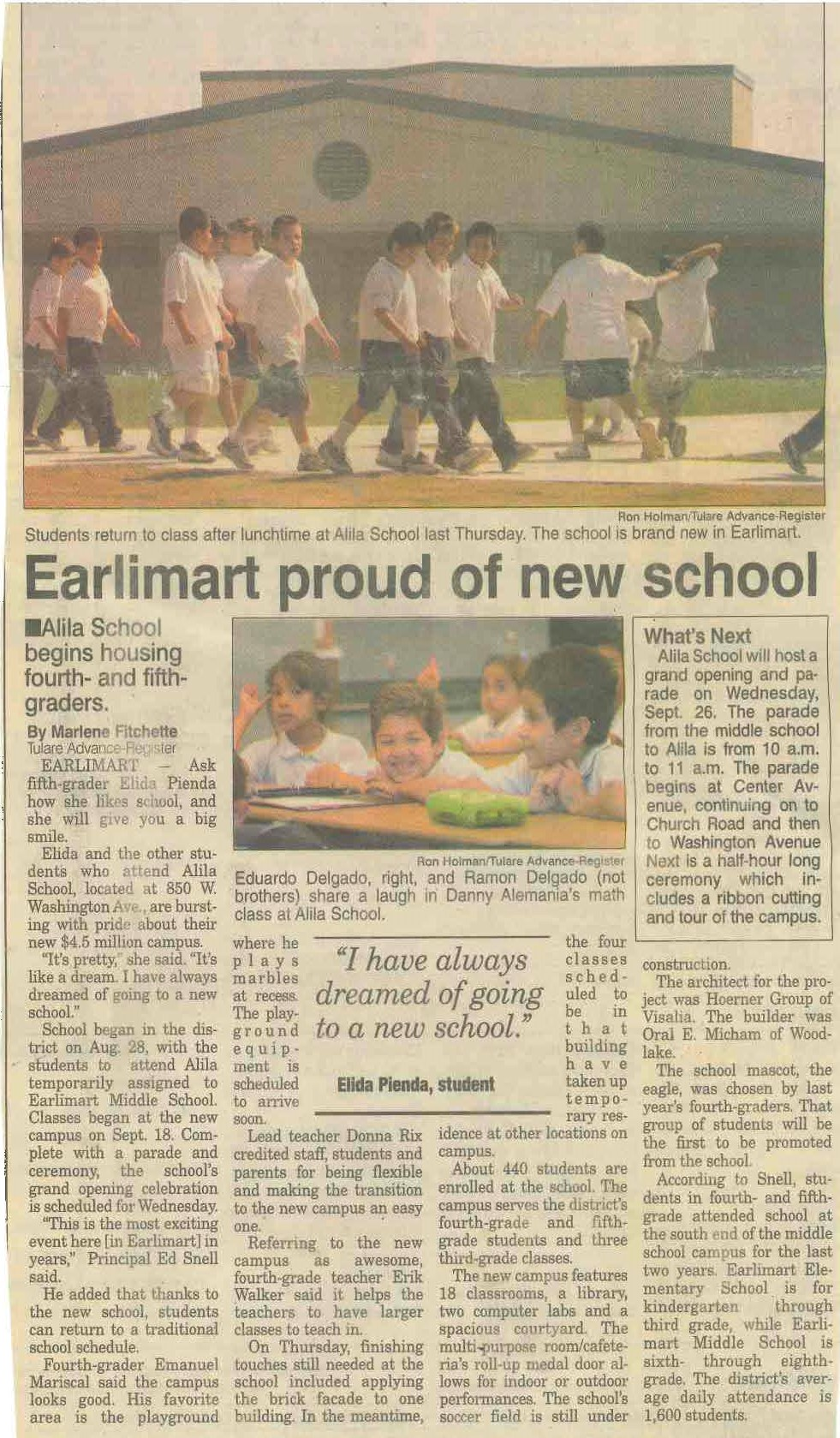